Mr. H. Martins is an American journalist and author currently embedded aboard the SMS Halcyon.

In regards to the invitation extended to Mr. H. Martins of the United States by the Imperial Military Cabinet-

Mr. Martins is to be extended every courtesy as a guest of the Imperium, provided berth and conveyance aboard S.M.S. Halcyon. He is to be granted access to the personnel and the routine activities aboard both Halcyon and Zepherus, and the attendant operations of Imperial Air Service IV Luftbattalion Timbuktu, 1st Sky Hussar Company as a first-hand observer and journalistic chronicler of our Anti-Piracy campaign, understanding that during military actions, and at all other times within secure areas of the dirigible, or subject to the discretion of the captain, he must be accompanied by an armed guard. This also holds aboard the Zepherus under absolutely any circumstance. It is imperative that Martins be returned to Berlin undamaged and of sound mind.

In addition, Martins is not to absent himself from any port of call during his excursion without escort. He has been instructed that he is not to interfere in any way with the regular operation of the Imperial Anti-Piracy Squadron or its officers in the pursuit of their duties in the defense of the commerce and safety of the citizens of the Imperium. Martins is permitted the use of personal sidearms in his own defense should he run afoul of any outlaw element, or should he choose to engage in gentlemanly action during combat operations. Specific instructions regarding Martins have been transmitted to Inquisitor Ragnos, who will be responsible for Martins' conduct. You will defer to the Inquisitor's judgment in the event of any question regarding Martins. Ragnos will also review and transmit the chapters Martins writes at regular intervals by official courier dispatch to Berlin, for distribution and publication in every major European city. The Minister greatly anticipates the public reception of this work, and the support it will generate from our allied states in the Anti-Piracy Treaty League. For myself, I'd rather have had Verne. He, at least, never sets foot outside of Nantes to do his research.

According to the dossier on file with the Imperial Military Cabinet (obtained from the French Consulate, and thus somewhat suspect as to completeness), Holly Dane Martins was born in Crawfordsville, Indiana, USA, on July the 4th, 1832 to (now retired) U.S. Navy Commodore Harriman Nelson Martins and his wife Rose (nee Kane). Martins is, at 5' 7", of medium build, known to indulge in marksmanship, fencing and Chinese boxing. He is surprisingly fit and of good stamina for a professional author. Brown haired with hazel eyes, he carries no known distinguishing marks.

Mr. Martins was enrolled as a midshipman at Annapolis, where he was known to be a student of Samuel Pierpont Langley. With the outbreak of the American Civil War he began his military career assigned to the blockade of Charleston; accounts of his history differ from this point. French records indicate that his service was undistinguished, and that rumors surfaced of "unbecoming behavior", i.e. gambling debts. This report is contradicted by personal accounts from Union veterans of his participation in Revenue Cutter Service actions against river pirates/Confederate forces that had developed a new submersible monitor for raiding traffic on the Ohio, Illinois and Mississippi rivers. Said actions are denied to have occurred by both the American Navy and Department of State.

After the war, Martins briefly attended Boston Tech (later the Massachusetts Institute of Technology) without graduating an advanced degree. Having apparently resigned his naval commission, Martins went west and achieved his early literary success with a popular series of pot-boiler dime novels about the exploits of the Texas Air Rangers, the U.S. Marshals, and the U.S. Secret Service in taming the American frontier. Martins was/is known for his ability to mix with the lower elements of society in the border towns, gleaning information that was no doubt useful to his law enforcement allies as well as adding a dramatic element to his tales. Many of his wilder stories seem to be based in fact as witnesses verify his presence. Mr. Martins and Dr. Jonathan Quinn claim not to have met prior to their mutual berthing aboard the S.M.S. Halcyon; however each seems familiar with the other's reputation and may in fact have mutual acquaintances, particularly in the U.S. Secret Service.

Martins is notable for his broad knowledge of emerging technologies, political events, military history, fine art and literature. He is a competent cook and barman, knowledgeable of various Eastern and Western cuisines. He also demonstrates a more than a passing ability with both nautical and aeronautical craft. He often dresses the part of a well-to-do dandy wearing a black "riverboat gambler" style hat. Unmarried, he is quite chivalrous (without chauvinism) towards women, and appears to be eligible. 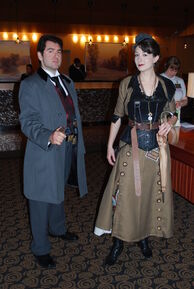 The lady didn't really need any help in deterring the ruffians, but the magical appearance of Martins' derringer no doubt added to their haste in retreat. 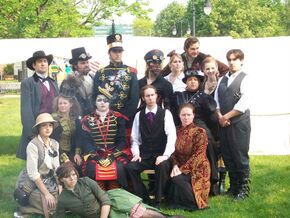 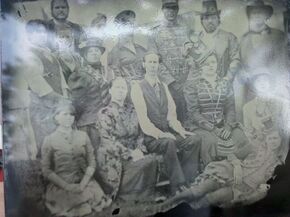 Martins (upper right corner), curiously obscured in a portrait with the Anti-Piracy Squadron. Compare to the electro-graphic image.
Add a photo to this gallery

In Berlin, there are wagers being placed on whether Martins is in fact a spy for the U.S. Navy, or simply a reckless dilettante... and on how long it will be before he proves one or the other. Considering the international interest in the activities of the Iron Phoenix, there may in fact be an "unofficial" official sanction behind Cabinet doors for Martins' presence.

Regardless, the German Admiralty and Military Cabinet Ministers are determined to get a series of best-selling books out of him before they decide if it will be necessary to execute him. The fame of the Imperial Anti-Piracy Squadron now borders on notoriety, as von Grelle's brutally excessive tactics are becoming common amongst the other airships in a bid to match her record of success. This has not been good for relations with citizenry caught in the crossfire; or with nations hoping to prosecute live pirates and recover stolen goods for that matter. So the solution seemed to be obvious - make public heroes beyond reproach out of von Grelle and her cohorts, lauding their protection of European lives and property in the best tradition of cheap fiction. Holly Martins seemed to be a gift from the Heavens when he dropped into the middle of things in Vienna.

It is not clear what Martins was actually doing in Austria. He claims that he was contacted by an old school chum about a business opportunity. Said school mate was one Harold Lime, a black marketeer apparently deceased in a carriage mishap shortly before Martins' arrival. Public reports are spotty after that point, as local authorities are unwilling to discuss the matter, save reporting that Martins first claimed Lime's "accidental" death was in fact murder, then a staged hoax. Martins may or may not have subsequently shot the "deceased" Lime to prevent him from poisoning the city's water supply with smuggled radium. Further inquiry into whether Lime was a member of, or had run afoul of, the Iron Phoenix organization remains unresolved. Mention Lime's Slavic girlfriend, who was turned over to the Russian authorities, and Martins becomes decidedly taciturn.

The only certain thing is that Martins' popularity in diplomatic circles soared after the incident, and that the signatory nations felt he was the best man to be placed aboard the Halcyon to lionize its crew, along with the crew of the Zepherus.

For a man of letters, many would be surprised at the number of curious devices he secrets upon his person - break-apart derringers, push dagger, Bowie knife, revolver, miniature incendiary bombs, a wire saw, lock-picks, etc. Those who've seen the company he keeps would, on the other hand, think it only prudent.

Retrieved from "https://steampedia.fandom.com/wiki/H._Martins?oldid=5047"
Community content is available under CC-BY-SA unless otherwise noted.